So, here my sun of writing blogs and interacting with you rises.

Hope all of you are doing good in this new normal. Plus you all are safe and sound in your home.

Guys, I really wanted to apologise from all of you for not paying attention here. My cellphone got format last to last week due to lack of storage. Although got normal in 2 days. But I couldn’t find time to create something and to publish for which I’m feeling Sorry!

Another thing, Today’s Ganga Dusshera and Gayatri Jayanti both on a same day. So, here I give my wishes to you all.

“May Ma Gayatri and Ma Ganga keep showering their love and blessings you and your family !!”

Having no significant gains from 50 days shut down in India’s battle to slow the spread of COVID-19.

This COVID-19 crisis has adversely affected all the employment and the labour sector across the country. The virus and the subsequent economic shocks have impacted the whole world of work across verticals. There is shocking news about the fast spread of the virus and the delay in discovering effective vaccine to contain the Covid-19 virus has led most employees, labours and workers to vex about the job loss or salary cut.

What happens after the lockdown, God knows alone! For now, there is no clarity on how long it would take for the companies to pick up. What a difficult time we are thrown into!

India’s ongoing lockdown to control the spread of coronavirus is threatening the AGRICULTURE sector as it overlaps with the time of harvest.

The farmer, who wished for better crop in his field this year, who worked hard just to see his land full of grown crops, is in fear this time. Neither do they have labour to help harvest the crops nor is there a buyer to buy them. Where around 50-60 labourers used to work in the field, helping in harvesting and storing. But now, during this lockdown, it’s only he and his family who is working in the field, trying to protect their grains from this variable weather. Farmers are very anxious. Even though the government has allowed the movement of combine harvesters under essential services, the order has not reached the people on the ground.

A farm crisis is staring at us. In the last few days, we have seen so many examples of farmers throwing away their produce due to crash in the prices – tomatoes in Madhya Pradesh, chilli in Andhra Pradesh, milk in some areas and even watermelons.
There could be food crisis because of our abundant food stock. We need to properly supports the farmers. While other industries are facing shutdown, it’s agriculture that will continue. Unlike other industries, farmers can’t pull their shutter down and stop farming. If that happens, the economy will collapse. The reality is that we are ungrateful to our farmers, when we realise that during this lockdown the only thing we want is FOOD.

●Lockdown means NO FOOD, NO SHELTER for Rural people.
This is the biggest and deepest news we are coming through.
“MIGRANT WORKERS”

A migrant is a person who migrates within their home country or from outside to pursue some work. They do not have intention to stay permanently where they works. Since all the industries and factories have been shut down, the migrant poor workers thus forced to return back to their home.

One survey in May found that almost 8 out of 10 migrant labourers had not been paid at all during the lockdown.
No wonder they’ve come to hate the cities and factories because of the way they’ve been treated by their employers. Migrant labourers across India have also told reporters they won’t return to see such humiliation again. “We’ll live on salt,” they say.                                               This is such a heartless disgrace of India. We don’t want them to hate the cities, where they come to fulfill their needs.
These migrants haven’t had money to recharge their mobile phones and to talk to family back, or money even to buy tickets once the government started special trains. They are forced to sell their ornaments to pay for it.

Recently, 16 workers from MP were killed under train in their sleep in Aurangabad.

How many English publications even bothered to give names of the workers crushed under the train? They just had to go faceless, and nameless. Even If there had been 300 killed in a plane crash, their names would appear in the newspapers.                                                          But 16 poors from Madhya Pradesh, eight of them Gond Adiwasis, they were just walking along those railway lines- as a guide to home. They slept on the tracks because they were exhausted and probably believed that there were no trains plying on those lines.

Reality of country. . . . . What we have received in last 62 years of Independence. We were always busy in minority appeasement, but the reality is suffering only common people who can from any religion.

Another news : UP roadways bus runs over 6 migrant labourers on way to Bihar from Punjab

6 migrant workers were killed and 4 were injured when a roadways bus ran over them. The group of labourers were just walking aside the road to return back to their village Gopalganj in Bihar from Punjab after closure of factory where they worked. Meanwhile, taking the advantage of darkness the bus driver fled the spot. The police are trying to identify then through CCTV footage.
Yet they were referred to the hospital undergoing treatment but the scream of innocent people are still on our ears.
Our roots are from our farmers and labourers. On hearing such kind of daily incidents, as a human I’m feeling very helpless. 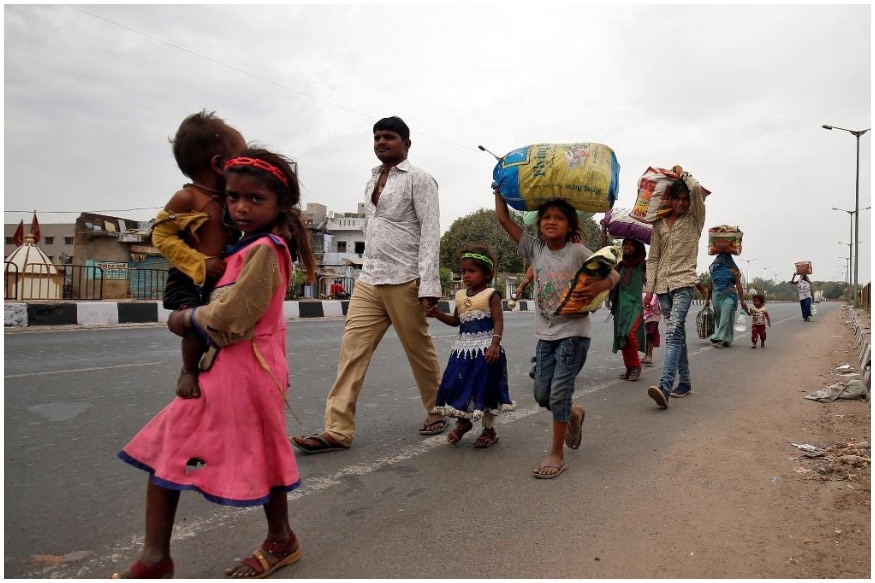 In the month of schorching heat,
on the hot street . . . . Crores and Thousands of strong father, carrying responsibilities of his family on their shoulder, 17-days old infant in the arm of a mother, his 7-year old child himself walking on the street barefooted holding the luggage, without complaining without any demand they are walking . . . .
Walking all day and night . . . .
Walking with all Hope . . . . . .
Walking with all strength to reach their SWEET HOME.

Apart from the daily COVID-19 pandemic updates, today we come to a very sad news. we are really shattered by the news of demise of one of the versatile actorso of the film industry Mr. IRFAN KHAN.

It’s not the lose of only film industry & entertainment but it’s a lose of a pure soul. It is going really hard to believe this. He not used to act his role only, but he live his role. He also won many awards including Padam Shree”.

This is hurting us more even, that we can’t go to give this legend a last visit and to give him our heartfelt tribute.

This is truly said by him in one of his movie. He Gone too soon.

We have no choice in front of life’s step rather than to stay positive.

This 2020 year is now being cruel. May this gem rest in peace. We will always remember you. You are truly a legend. Down to earth. 🙏 He was the makbool, the cherry of Pie, 🍒 the Out of the Lunchbox. 🍱 He was the extra in ordinary. 🙌

He really wanted us to watch his recent movie Angreji Medium. So guys, if you didn’t watch it till now then please watch it as his last wish. 💕 #RestInPeace Om Shanti !! 🙏

Thou art the real goal of human life.

We are yet but slaves of wishes

Putting bar to our advancement.

Thou art the only God and Power

To bring us up to that stage.

The first line of the prayer affirms our goal. The word ‘Master’ refers to God and God alone, the ultimate Master who resides in each and every heart. It believes that the human spiritual guide, or Master, is one who helps aspirants establish contact with their inner divinity.

The second line of the prayer refers to our present state, acknowledging that we are the creators of our own problems and that our wishes and attachments are obstacles to our progress.

The third statement points to the source of our liberation, recognizing that it is God alone who can help us rise to the higher state of existence.

The prayer of Sahaj Marg is a gentle daily reminder. It is a humble acknowledgement of where we are now and how we would like to grow.  It is recommended that we start the day with this prayer, saying it silently once, allowing the meaning to sink into our consciousness before beginning our morning meditation. At the end of the day, this same prayer is repeated mentally once or twice, and then we meditate on its meaning for ten minutes. Reflection on the prayer is the last thing we do before the day is brought to an end.

This practice of beginning and ending the day with the prayer establishes a connection with the Source throughout the day and night.

Today, On this auspicious day and during this difficult time, we did Gayatri Havana in our Home.

We did it for the welfare of us, for them who are fighting with the disease, for saluting our warriors who are working continously out there just to save our country. We can’t step outside, we can only give our participation by staying at our home.

We can make a shield by chanting and praying together with our family to protect our dear ones and to keep negativity away.

We are lucky that we have a roof on our head, we have enough ingredients to cook varieties.

I hope you all are doing good.

This is my second post on my blog (consider it as first one). After creating the account since 2017, now I’m back to this and I’m taking baby steps on writing blog posts.

Help me in doing this. 🙂

Stay Tuned for the posts !!

The World Youth Skills Day is observed globally on 15th of July every year to raise the awareness about the importance of skills in youth.

The ability to communicate or to express your talent is the primary factor that distinguishes human beings from animals and distinguishes one individual from another. Not only in youth but in everyone’s life, effective skills plays a major role in shaping their future.

This is a text widget. The Text Widget allows you to add text or HTML to your sidebar. You can use a text widget to display text, links, images, HTML, or a combination of these. Edit them in the Widget section of the Customizer.